Darren’s been crazy about dogs these past couple of weeks. He borrowed ALL stuffed dogs from his auntie who loves stuffed animals, and bring them to his playroom.
He totally “has” 6 dogs, 3 of them are the dogs from “the Cat and the Dog” brand, if you know what I mean; 1 is a Golden Retriever puppy (named Kenny, like the real one in our house), 1 is an old brown puppy, and the other is a tiny, orange, ugly dog that used to be a key chain, named Chop-chop. 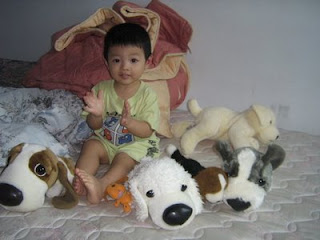 Darren still sleeps with his favorite Panda bear and a little cow headed bolster. But it’s been about a week since he insisted on having Kenny in bed whenever he’s going to sleep. That Kenny dog, has to follow him EVERY WHERE in the house, in the car when we go out to buy groceries (I strictly forbid him bringing it along into the stores, because it’s too bothersome), Darren even wants to bring it along when I take him to the bathroom to pee! It takes a wit to distract him from bringing it into the bathroom.

When Darren wakes up in the morning, he would take Kenny out of the bedroom, and start “registering” each and every single one of his dogs. He knows all of them by heart: Kenny, the “abu-abu” (grey) dog, the “coklat” (brown) dog, the curly white dog, and tiny Chop-chop. He assemble each one of them, line them up in front of the window, and together, watching the wind blowing the curtain (he loves it so much, watching the wind). Sometimes when the day is cold, he put a blanket over himself and his “friends” to keep them from the cold wind ^__^

When we go downstairs, he wants to bring all of his dogs along, but I usually make him choose a maximum of 2. And say he brings Kenny and the grey dog, when we return upstairs and accidentally forgot the dogs, we HAVE to go back downstairs and pick them up! I once got curious, so when I got back downstairs, I took both dog, but gave him only one of them. He immediately asked for the other one, precisely naming which one!
at 1:24 PM
Email ThisBlogThis!Share to TwitterShare to FacebookShare to Pinterest
Labels: Darren, dog, Kenny, stuffed animal