Here’s a pic of our family praying before Darren’s meal. (Thanks to my friend Anita who took and uploaded the pic in my FB.) 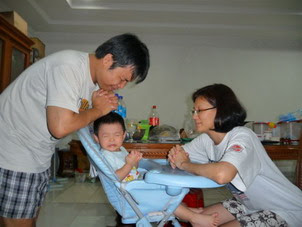 He closes his eyes that tightly and says “AMEN!” right after ^___^

He grasp the idea pretty quickly. Whenever he eats, and there are people around him, I no longer have to remind him to offer. He’d say, “Mbah, mamam!” to the old lady who works at our house, making his offer. He’d also say, “Kong, mamam!” to his grandpa, or “Paw, mamam!” to his Papaw (=Daddy), and so on.

Funny thing is whenever an ant happens to walk by on the table. He’d say, “Mut, mamam!” [“Ant, eat!”] and put a crumb of his bread or a grain of his rice within the ant’s reach.
Of course, I never taught him that, I guess he’s just kinda considerate ^__^
at 1:44 PM
Email ThisBlogThis!Share to TwitterShare to FacebookShare to Pinterest
Labels: Chinese culture, eat, meal, Prayer