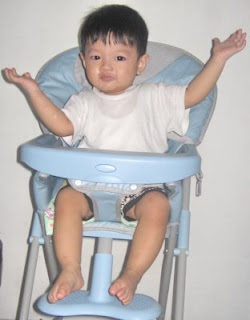 Although he’s been able to say “pee... pee...” when he needs to pee since as early as 13 months, he only learned to say “poo...poo...” and truly meant so since around 15 months of age.
Now at 16 months, our triumphs have been consistent enough to be called official.
Darren no longer needs diapers except for nighttime sleeps; and that’s just because Mommy doesn’t want messy wet sheets.

Darren still pees in his sleeps sometimes, but this will take some 4-5 years to conquer, so let’s give him all the time he needs for this one, shall we?
For the time being, he’s been doing a wonderful job as a young toddler, and we’re so proud of him.

But he did learn another thing from toilet training: a chance to “escape” from our bedroom when it’s already high time for him to sleep.
Whenever he has difficulty sleeping -which happens almost everyday-, he would toss around the bed, and then says “pee... pee...”
At first, I would hurrily bring him to the bathroom to pee, then he would pee just a few tiny drops. The second time around, he would just call and point at his favorite things in the bathroom and did not pee at all!
Since then on, I never take him back to the bathroom when we’re in bed and ready to sleep, so long as I made sure he did have a good pee beforehand.